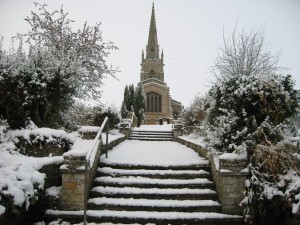 The church is of one period throughout, having been rebuilt in the latter part of the 15th century,and is a very perfect example of a village church of that date, unaltered in plan and little changed by restoration. At the east end of the nave outside is a roof table wider and of higher pitch than that of the present chancel,  which seems to indicate that the body of the church was built on to an earlier chancel, which was afterwards pulled down and the present one erected. The whole structure, however,is uniform in design, and its situation on rising ground above the valley of the Nene makes its spire a prominent landmark.

With the exception of the upper stage of the tower,which is of dressed stone, the whole of the building is of rubble, with flat-pitched leaded roofs and plain parapets. The walls are plastered internally. The building was restored in 1854–55, new roofs being erected and the nave reseated.

The chancel is of two bays and has a four-centred east window of five cinquefoiled lights and diagonal angle buttresses. On the south side are two three-light windows and one in the west bay on the north, the east end of the north wall being covered by the vestry,  which was built about 1881 on the site of an old vestry which had long disappeared; the doorway of the old vestry alone remained. At the east end of the south wall, set within the window splay, to which it also opens, is a piscina recess with fluted bowl, with which is combined a rectangular aumbry in the thickness of the angle of the wall. The chancel arch is of two orders, the outer with a hollow chamfer continued to the ground, and the inner on attached shafts with moulded capitals and bases. The oakscreen, with rood and attendant figures, is modern.

The arches of the nave arcades are of two orders,like the chancel arch, but have an ogee curve at the top, and spring from piers of unusual type, in plan an oblong set north and south, down the angles of which the outer hollow chamfered order is carried,and with attached shafts east and west: the responds are of similar character. The tower arch is also of the same type. All the shafts have moulded capitals and high moulded bases, and the uniformity in design and detail make the interior of the church one of much dignity and beauty. The north and south doorways occupy the second bay from the west, each of the other bays having a recessed three-light window similar to those in the chancel, with wall benches below the sills. There is a piscina at the east endof the north aisle,   in the jamb of the respond, the bowl of which is partly cut away, and to the east of the south doorway a groined niche for a stoup, the supporting half-octagonal shaft of which still remains.

The clear story windows, four on each side, are four-centred and of two cinquefoiled lights, and there are similar windows in the side walls of the porch. Over the outer moulded doorway of the porch is a niche containing a modern figure of St. Nicholas.

The tower is of four stages, marked by strings,and has wide clasping buttresses and battlemented parapets with crocketed angle pinnacles and gargoyles. The moulded west doorway is set withina rectangular frame with quatrefoiled circles in the spandrels, and above it is a three-light window. On the north and south the two lower stages are blank,but in the third stage on each side is a small rectangular opening containing a quatrefoiled circle. The bellchamber windows are of two trefoiled lights, withquatrefoil in the head and ogee hood moulds. Below the parapet is a band of quatrefoils set lozengewise. There is a vice in the north-westangle. The spire is crocketed and has two tiers of lights, the lower on the cardinal and the others onthe diagonal faces.

The font appears to be of 13th century date, and consists of a plain octagonal bowl on eight short attached shafts without bases or capitals.

The chancel contains wall monuments to Mary,wife of Sir John Washington, kt., of Thrapston, and daughter of Philip Curtis, who died in January,1624–5, and to Katharine, wife of Philip Curtis (d.1626). In the floor is a modern brass commemorating John Nicoll (d. 1467) and Annys his wife, placed here in 1910 by their descendants in the United States of America.

There are some fragments of old glass in one of the windows.   The modern glass in the east window is excellent.

The pulpit and all the fittings are modern. The organ is in a loft at the west end below the tower.

There are six bells, the first and third by Henry Bagley of Chacomb 1678, and the others by J.Taylor & Co., of Loughborough, 1892.